Dissect Season 8 is out NOW on Spotify. Over 12 episodes, we break down Kanye West’s polarizing album YEEZUS. Episodes release every Tuesday. Listen free on Spotify. 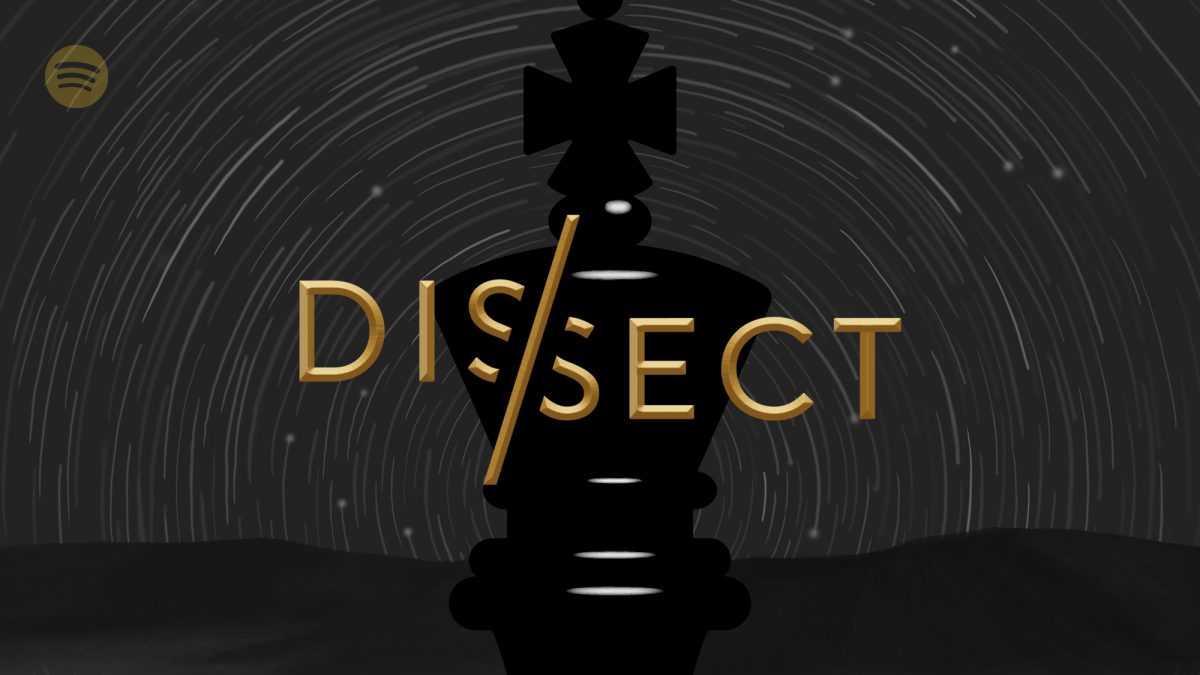 BLACK IS KING. A mini-series. 7 episodes released over 7 days starting Monday, January 25th. Only on Spotify.

Dissect applies its award-winning analysis to the symbols, themes, and meaning of Beyonce’s film BLACK IS KING. From Dogon masks to durags, from Moses to Mansa Musa, from Bey’s backyard to Johannesburg, and from life, death, and the spiritual spaces in between, BLACK IS KING traverses freely across time, space, and cultures to highlight their connection and showcase a greater, unified Black lineage. Through this grand celebration of the Motherland, Beyonce demonstrates the profound connection that we all have to each other in this great circle of life on planet earth.

END_OF_DOCUMENT_TOKEN_TO_BE_REPLACED

Left, the camera zooms out from the burning house, emblematic of the curse; right, the camera continues to recede in the next shot, this time travelling backward through a Louisiana Bayou. These two shots help the viewer travel from the haunted house in chapter 5 back to Madewood Plantation for chapter 6.

“I come from a lineage of broken male-female relationships, abuse of power, and mistrust. Only when I saw that clearly was I able to resolve those conflicts in my own relationships.”

Left, two young Black girls playing with dolls on the bed; right, the hands of the girls fixing their dolls dress and jumping on a bed. They represent one of many generations of Black women quite literally overcoming the past by healing in this historical place.

A young girl watches Beyoncé’s beauty routine admiringly, and the spoken word implies a yearning to see herself in the same image.

New Orleans chef and activist Leah Chase, otherwise known as “The Queen of Creole Cuisine,” an iconic representation of the strength, resilience, and wisdom of generations of Black women who “cannot be contained.”

END_OF_DOCUMENT_TOKEN_TO_BE_REPLACED

Beyoncé dancing with her girlfriends, claiming “I ain’t thinking about you.” These acts and symbols establish a reclamation of power and agency in the face of the Madewood Plantation, an “impossible Black place.”

The final shot of “Apathy,” a group of five women walking into the wilderness, naked, symbolizing both courage and vulnerability as Beyoncé embarks on a new path, “far away” from her husband.

Left, Beyoncé encircled in fire, adorned with a blood red dress, a metallic bib necklace, and a spiked, bejeweled headpiece; right, a depiction of the Afro Brazilian spirit, Pomba Gira. Followers of Brazilian religions Umbanda and Quimbanda call upon Pomba Gira to aid them in matters of love, sex, and vengeance.

After a black screen and the sound of a door unlocking, the camera enters this long, eerie hallway, centered on an ominous red light at the end of it. Perhaps symbolic of “the curse,” the heart of the legacy of slavery and its inter-generational wounds inflicted upon the identities and relationships of African Americans.

The “House of Slaves” on Goree, an island off the coast of Senegal, the site of “The Door of No Return.” This doorway, opening out the Atlantic Ocean, is observed today as a symbol of the final threshold enslaved Africans passed through before boarding slave ships embarking on the tortuous Middle Passage to the Americas.

President Barack Obama looks out the “Door of No Return” during a tour of the Maison des Esclaves Museum on Gorée Island, Senegal, June 27, 2013 (Official White House Photo by Chuck Kennedy). The site has also been visited by Pope John Paul II as well as Presidents Bill Clinton and George W. Bush.

The camera dollies forward, giving the viewer a sense of compulsion and helplessness, drawn powerlessly forward toward this curse at the end of the tunnel.

END_OF_DOCUMENT_TOKEN_TO_BE_REPLACED

Beyoncé unleashing her rage, reclaiming her agency, and demanding the respect of her partner through a series of boasts, threats, and ultimatums, culminating in a “final warning,” where she throws her wedding ring at the camera.

Two rows of Black women seated inside a school bus, swaying back and forth, their faces and bodies covered in Nigerian artist Laolu Senbanjo’s “The Sacred Art of the Ori.”

Left, From NPR.org, members of the Washington Freedom Riders Committee prepare to leave New York for Washington, D.C., on May 30, 1961; right, from UC Berkley News, a Montgomery bus rides nearly empty as a result of the boycotts.

Overlaid with the line “Her God was listening,” a subtle suggestion that God is silent but present for Beyoncé’s suffering, one of many glimpses of hope for redemption.

END_OF_DOCUMENT_TOKEN_TO_BE_REPLACED

Beyoncé as first a sleeping, silent, and suppressed servant and then emerging as the powerful, life-giving goddess Oshun.

Left, her denial transitions to rage and destruction, culminating with a vicious knockout blow of the camera and then, right, Beyoncé stampeding a row of cars in a monster truck.

“Anger stirs and wakes in her…There is a sense of being in anger. A reality and presence. An awareness of worth. It is a lovely surging.”

The Edna Karr High School marching band in streets of Algiers, a section of New Orleans also known as the 15th Ward. For nearly 150 years, this area served as the location where captive Africans were held before being sold into a lifetime of slavery.

As the murder revenge fantasy is described in poetry, the camera winds ominously down a dark stairwell to the chapter’s main setting: an underground parking garage.

The words of Malcolm X at the funeral of Ronald Stokes are laid over visual portraits of everyday Black women on the streets in Louisiana. Their strength is silently yet effectively acknowledged as they stand strong, beautiful, and resilient despite their mistreatment.

The black and white images of a circle of women underground, gowns tied together at the wrist, implies a shared struggle, one that binds them all. Their movements are individualized above, but inextricably linked.

Their movements go from being individual to now being in unison; their dress and unity representing the beauty and resilience Black women share.

Here we are confronted by Beyoncé for the first time in the chapter, shot from a low angle to show power. As she approaches the camera, it recedes further away, as if intimidated or emasculated by Beyoncé’s direct approach and confrontation.

END_OF_DOCUMENT_TOKEN_TO_BE_REPLACED

Beyoncé in Chapter 1, with her hair covered: left, a hoodie in reference to Trayvon Martin and systemic injustice; right, a headwrap alluding to the the tignon laws of Louisiana, each implying her repressed state.

Fort Macomb: A Symbol of “the Curse” of Slavery

Fort Macomb, from Chapter 1, an actual relic of the American Civil War and a visual allusion to the West African castles of the slave trade. Left, a canted angle to create a sense of stress or disorientation; right, a wide landscape shot.

Left, Beyoncé tepidly approaching those ruins, which are again shot wide in landscape juxtaposed with a vast sky (right).

Beyoncé’s leap of faith is the destruction of the current self that’s required to resurrect into something new. Left, rack focus is used to only slightly obscure what looks like tears in her eyes, after which she symbolically removes her hood (center) and leaps (right). Notice her Christ-like pose as she falls.

Left, Beyoncé doesn’t hit the ground, but rather falls into a large body of water, introducing the next chapter “Denial.” Right, Beyoncé sheds her clothes, revealing nude undergarment. Water is traditionally symbolic of life, rebirth, fertility, and spiritual cleansing.

Left, Beyoncé submerged in water is in direct contrast with her in a bathtub without water on “Intuition” (right).

Left, Beyoncé swims into a bedroom furnished with New Orleans “Creole Style” furniture and finds herself sleeping in bed alone, seeming to represent her current role in her relationship: silent, still, and as she described, “less awake” (right).

Beyoncé opens her eyes, looks at her surroundings, and lets out a huge breath; she’s awake now, or, perhaps more accurately, she’s been reborn.