As The Boy arrives at his mansion, the script notes he’s now playing the song Made in America by Kanye West and Jay-Z, featuring Frank Ocean, which examines Black history in America, with Frank Ocean comparing Civil Rights era icons to the biblical Mary, Joseph, and “sweet baby Jesus,” and notes with pride that “we made it in America.”

The Boy sings his own altered version of the hook: Instead of “Sweet Mother Mary, sweet Father Joseph / Sweet Jesus,” The boy sings “Sweet Cream Havarti / Sweet Mozzarella / Sweet Cheez-its. They’re made in America / Sweet Bowl of Cheez-its.” Remember that The Boy is at the mansion to make money: cheese, cheddar. In evoking money as a replacement of Civil Rights and religious icons, The Boy’s parody illuminates the way our system has commodified and replaced eating, a survival need, with economic struggles.

While this line may seem at odds with The Boy’s previous suicide attempt, remember that when he woke up, the nurse told him that if he had really wanted to leave, he could have, as Glover himself said on The Breakfast Club (above).

“Maybe it’s the last night” refers both to the imminent death The Boy faces in the script, as well as the general feeling that any day could be our last, and our need to understand how to act given this incontrovertible truth. As Glover stressed in interviews at the time (above), we could die at any moment. 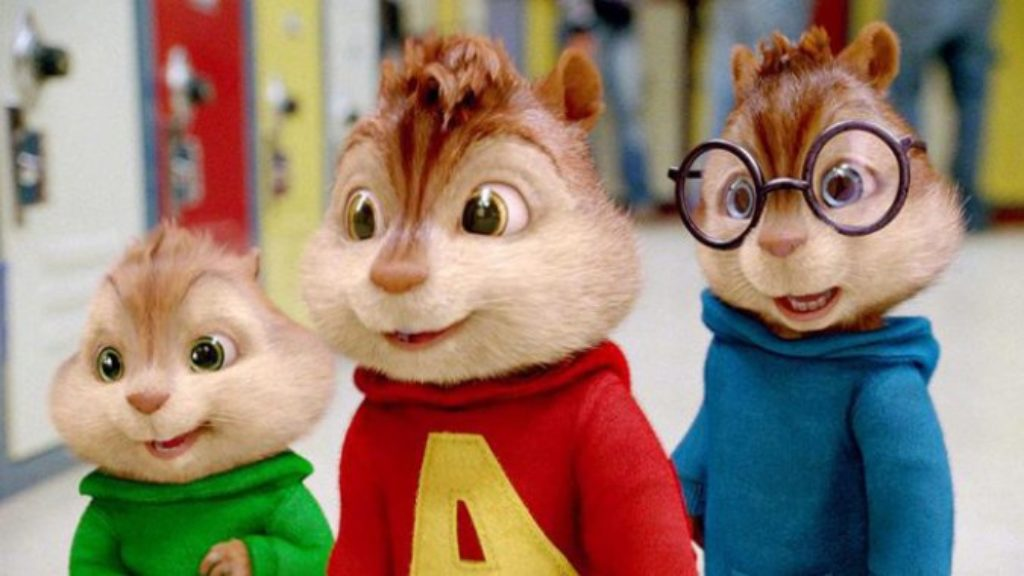 After branding himself as someone who bucks the institutions of marriage (referencing the scarlet “A” worn by Hester Prynne in The Scarlet Letter) and the government itself (alluding to the “A” in the anarchy symbol while raising a fist), the connection to Alvin and his group calls to mind Gambino’s musical career. Alvin & the Chipmunks was created as a novelty act in 1958 – their high-pitched, sped up singing eventually becoming the term “chipmunk-voiced.” This technique has been adapted by other musicians for different effects, and perhaps most relevant to Glover, formed the basis for Kanye West’s early music – which was affectionately described as “chipmunk soul.”

Gambino continues, rapping, “Breathe in, breathe out, mi amor.” The concentration on breath is a call for presence and mindfulness. But given the likely reference to Kanye’s early music in the previous line, this also seems to be a reference to the song “Breathe In Breathe Out” featuring Ludacris from Kanye’s debut album, The College Dropout.

Earth: The Oldest Computer features Azaelia Banks, likely because of her infamous association with the internet. She galvanizes audiences and grapples with topics such as mental health, sexual orientation, race, and more with almost terrifying candor. Simply put: Banks is the maelstrom of the web personified, and Glover’s relationship with Banks, albeit founded in the web, also extended to real life (above).

“Common sense, the consequences / Retweet the truth, then regret the mentions.”

Gambino identifies the generation of people born before the internet became pervasive, having experience with humanity before the web. It’s an important, pivotal, transitory perspective to Glover, as he details in the timestamped videos above. 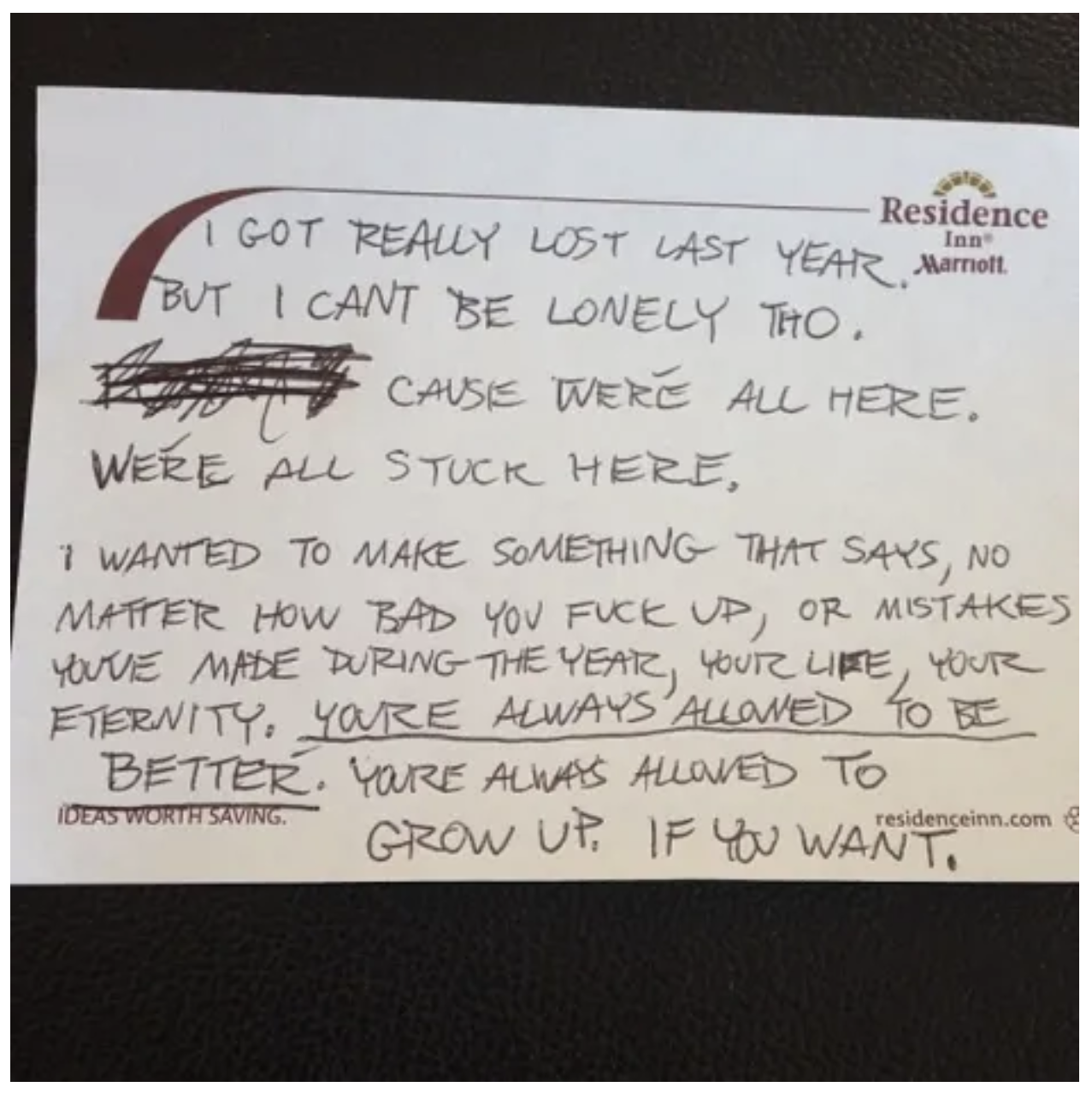 In many ways, this dualistic line encapsulates the global message of Because The Internet. It expresses the loneliness inherent to the human experience, but also the fact that this loneliness is a lie — that we’re all connected. Our independence is interdependent – we rely on each other to exist.

During live shows (above), these repetitions of the hook were swapped out with more improvised, intimate pleas from Gambino. The specific lyrics might change in small ways from night to night, but covered the same thematic idea: Gambino didn’t want to die.

“GPOY” is an acronym popular on sites like tumblr, standing for “Gratuitous Pictures Of Yourself.” It epitomizes the indulgence and narcissism of the internet.

In live shows, during this section, the mansion projection behind Gambino and the band crumbles apart and is sucked into a vector-esque vortex of code as all hell breaks loose instrumentally. It appears to be an attempt to portray life flashing before your eyes, for Glover, referencing his past work in a sonic collage.

This is the climax the track has been working toward since the beginning, and Gambino emerges crooning an unexpected love song, an interpolation of another old Gambino song — this time it’s So Fly off the mixtape Culdesac.

Understanding that Gambino is using past work to create a life flashing before his eyes experience, we have to note that the production of Earth resembles two older songs from Gambino’s career. First, the song Get It (left), from Glover’s mixtape Utterances of The Heart, published under the moniker mcDJ. In turn, this beat was altered and recycled for Gambino’s track The Last, the closing number from his 2010 mixtape Culdesac.

In the script, The Boy is held up at gunpoint in his mansion by crooked cops. It reads, “If I was the director, the one who made this moment, the one who saw this moment millennia before, the one who coded this world and allowed this to happen, I’d have Thundercat’s “We’ll Die” playing as The Boy looks around at his once castle.”

Recall that Thundercat appears in BTI, as producer, bass player, and vocalist on Shadows and Pink Toes. The script then follows, with the bold italics that indicate The Boy’s internal thoughts, “…try to do your best.” These are the final lyrics on the song We’ll Die.

Before the shootout, The Boy gets a reprieve, a vision, in the form of the video and snippet “Yaphet Kotto” (above). He’s tearing himself apart in the track, fitting for the moment of death – of deconstruction and loss of self. “Yaphet Kotto” was the song that formally announced the album’s release and the first tangible piece of the Because The Internet world. 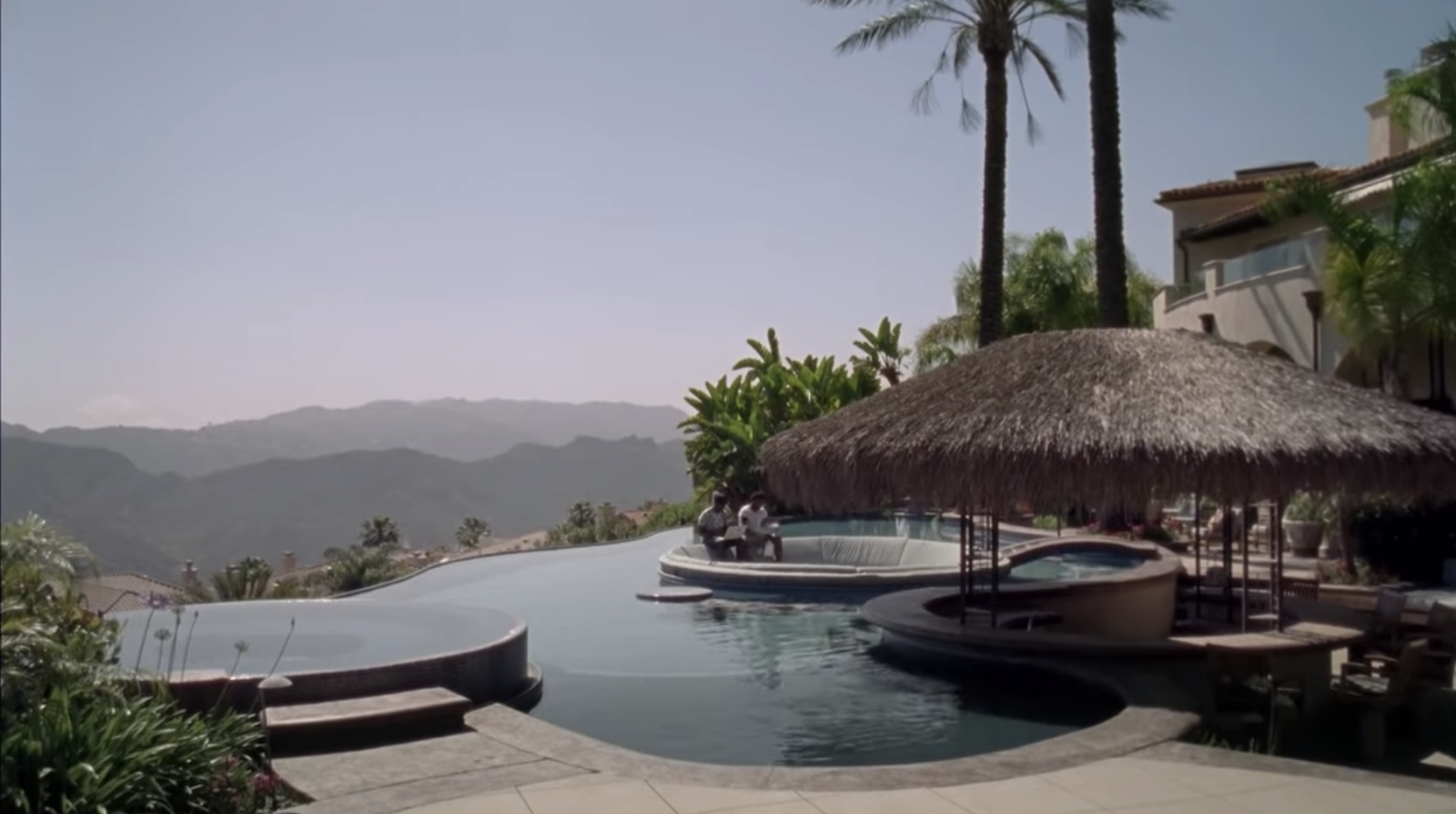 At the time, it’s visuals were extremely cryptic, yet now, in the screenplay’s final scene, we come full circle, closing yet another loop cycle in BTI. We knew the end from the beginning. And of course, like the story of everyone, ever, the end is death. Recall that the infinity pool is a central image of The Boy’s mansion, tied in to both his father’s opulence, but also to the images of cycles related to Buddhism.

The highlighted circular imagery across media, such as the spiral staircase, circular windows, island in the middle of the pool, and “infinity pool” terminology keys us in on its connection to loops, infinity, and the concept of reincarnation. 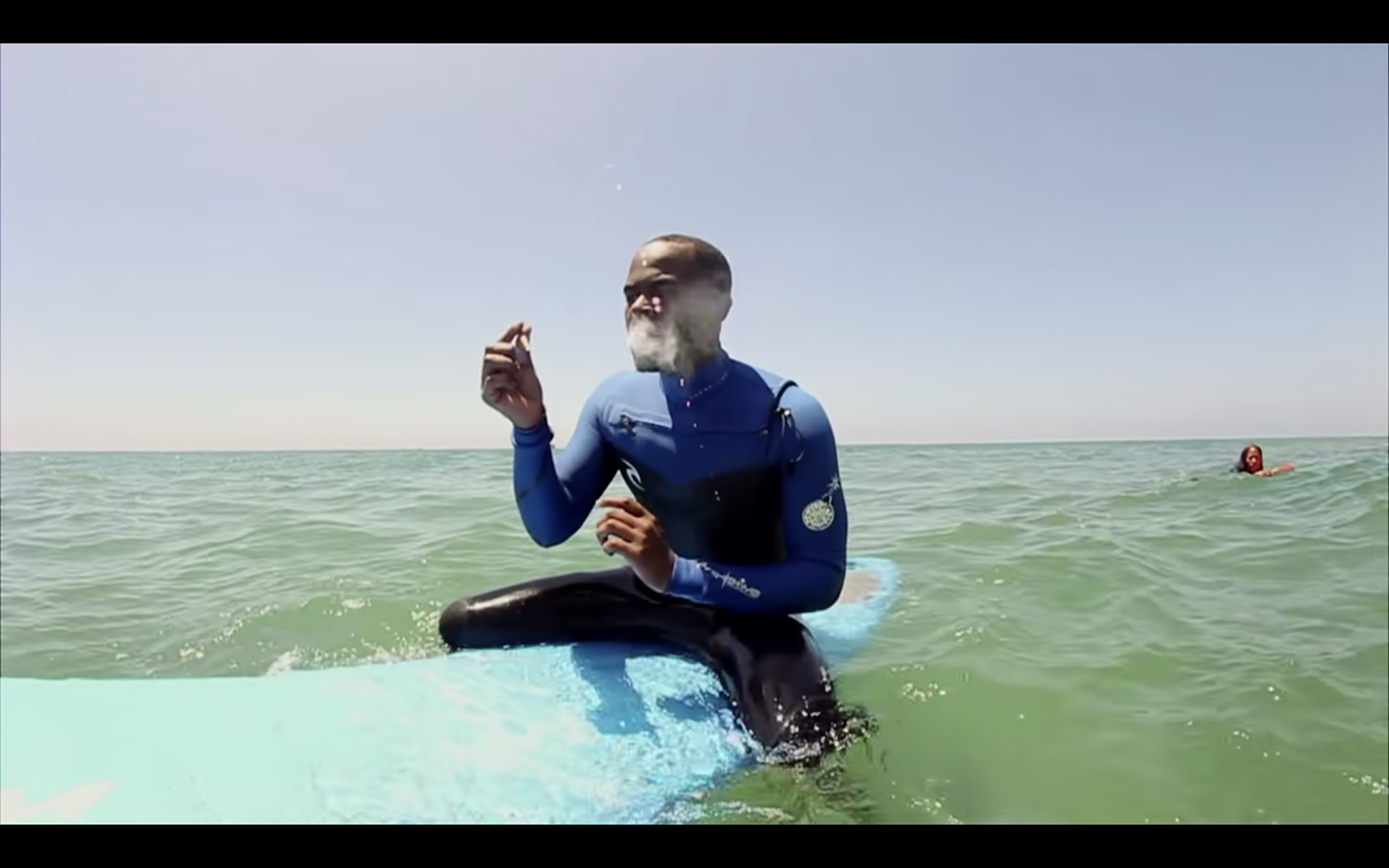 The water Gambino/The Boy drowns in has symbolic significance, as water has flown throughout BTI as a recurring motif. From the ocean where The Boy surfs (above) and later pours his father’s ashes… …to the reawakening purpose it serves in the shower, to the spit in Glover’s mouth as he tries to rap, sing, speak, communicate, and connect with us.

As The Boy floats in the water, Naomi and Steve look on, as if only mildly satisfied. Between the two, they represent both The Boy’s romantic relationships and his hedonistic friends – both the So Fly and GPOY sections of the outro. The shot of him floating in the pool also contains a few clear allusions to classic film and literature.

As the shot is underneath the water, it mimics the infamous opening scene of the 1950 film Sunset Boulevard (above, right), which sees the narrator Joe Gillis floating dead in a Hollywood pool. The shot conveyed the dangers of Hollywood excess and twisted love, as the narrator of the film, a writer, attempted to mooch off of an older actress who had acquired wealth from her long-gone stardom.

In Sunset Boulevard’s shot, the roles of Steve and Naomi as onlookers are instead policemen. Like Yaphet Koto being the first piece of the BTI world, the pool scene in Sunset Blvd was the first shot of the film, and the rest of the film was conveyed through flashback, leading up to the narrator’s death – a narrative loop structure much like we discovered in BTI.

The pool shot is also a clear allusion to the end of F. Scott Fitzgerald’s 1925 novel The Great Gatsby. In a climactic, conclusive scene, the titular Gatsby is murdered while swimming alone in the pool of his grandiose Long Island mansion.

Gatsby’s pursuits in the novel became consumed with money. A pool is an artificial body of water, and in BTI, Sunset Blvd, and Gatsby, the pool is connected to a large mansion, and thus the death of Gatsby, The Boy, and Joe Gillis hold similar symbolic significance of becoming consumed by the structures society builds around life. Instead of a completely pure source of water, something about the construct, the chemical additions, and the wealth represented by a personal pool taints the purity of the water symbolism. 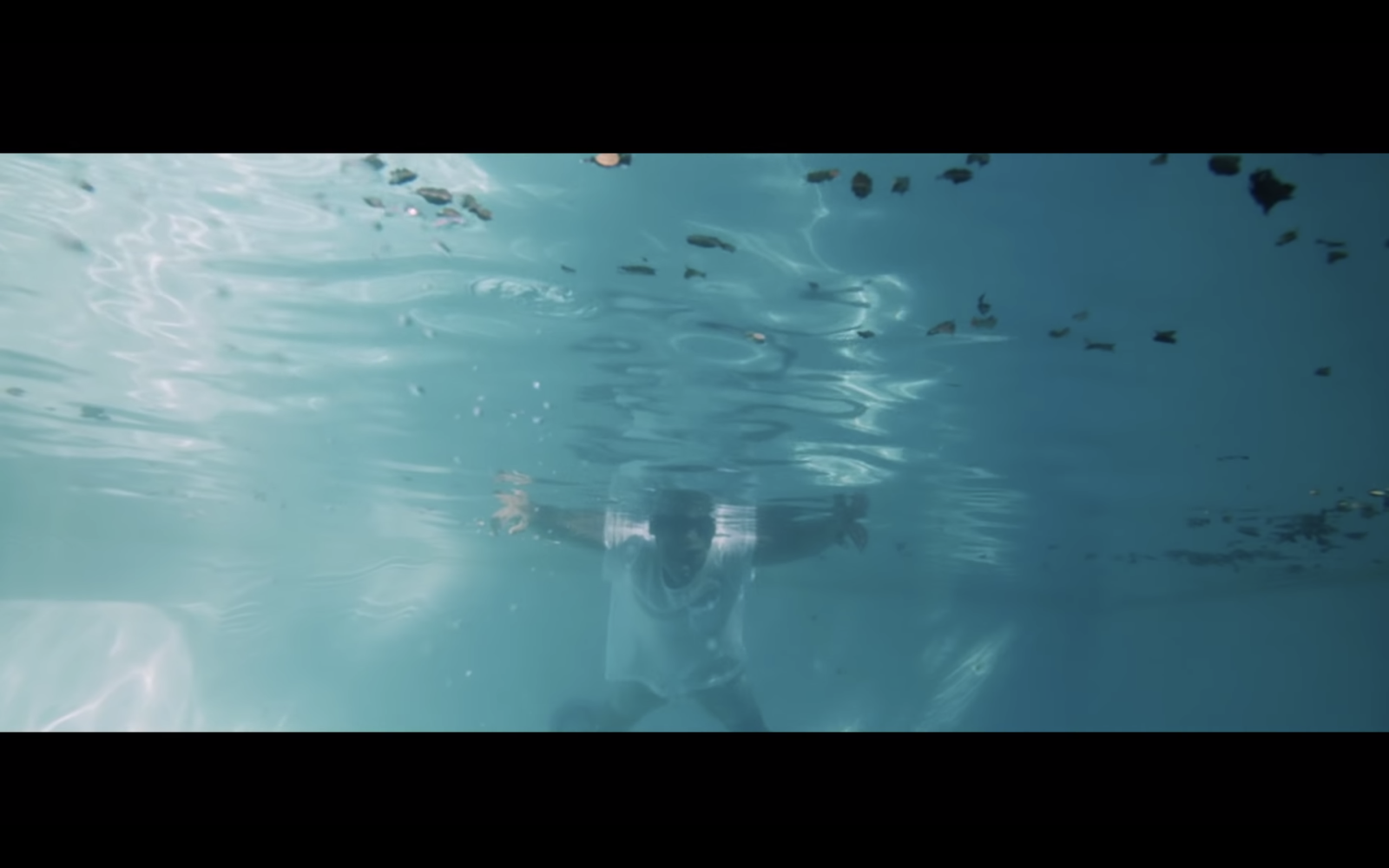 Recognize The Boy’s pose in water. Like the album cover, he is staring directly at the camera, centering his identity. His arms are outstretched wide, feet together below him, in what appears to be a clear allusion to Jesus on the cross. He’s even got the two onlookers behind and to the side of him. Recall that Glover tied the death of The Boy’s father to the Death of God in Zealots of Stockholm – in this case, The Boy would be the Christ figure, the son of God. 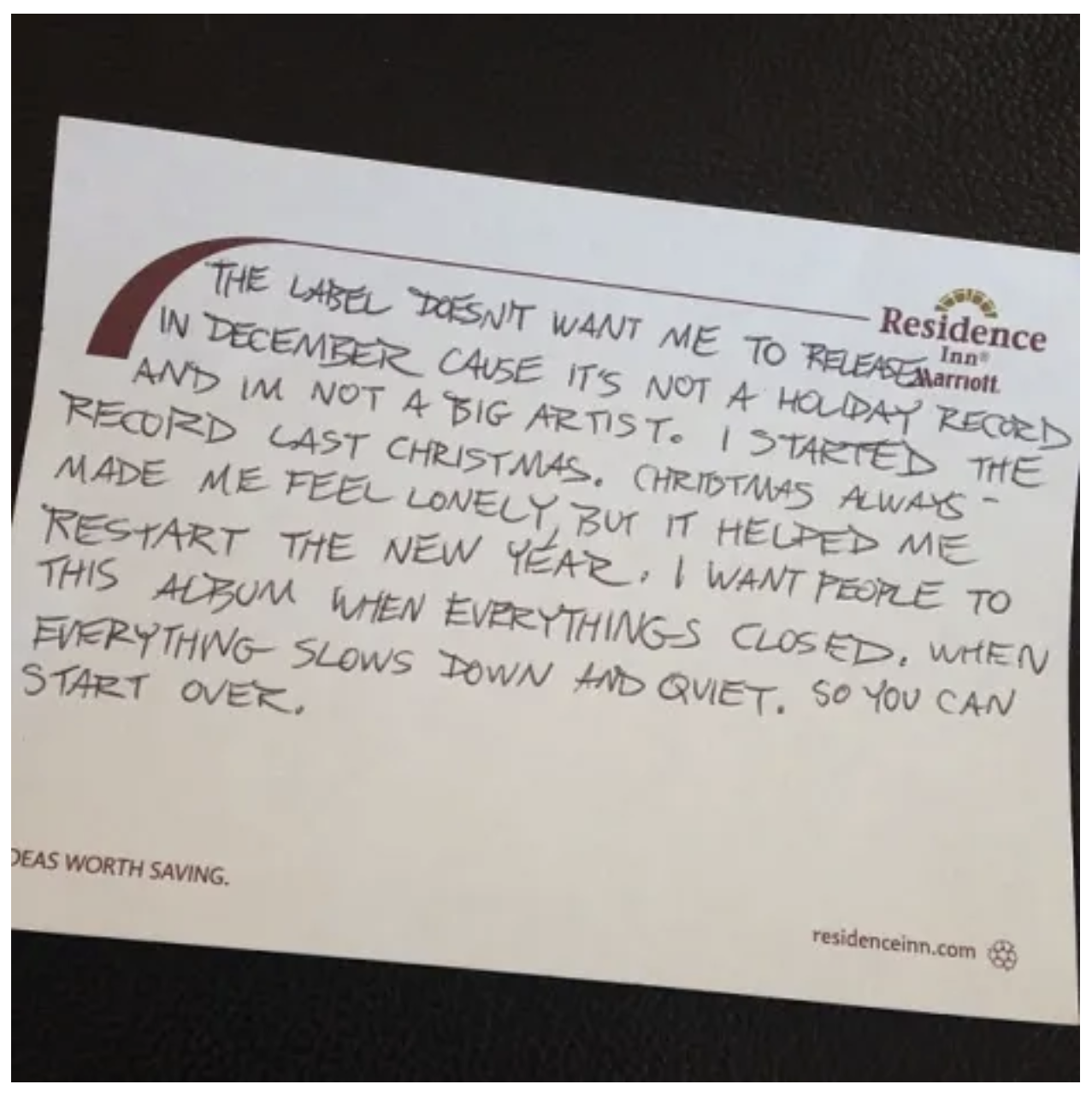 Glover also was intensely focused on releasing the album around Christmas time, applying public pressure to his label with the support of fans, and using one of his seven instagram notes to address the situation. Glover focuses on the idea of a rebirth. This is a direct parallel for the ideas of reincarnation throughout BTI and The Boy’s position as a Buddha-like figure as covered on a previous episode, combining Eastern and Western notions – quite literally bridging gaps and bringing varied religious symbology together.

In live performances of the Deep Web Tour, Earth: The Oldest Computer preceded an extended encore that spanned Gambino’s earlier musical catalogue – which would fittingly start with a performance of So Fly, the very song interpolated in Earth’s outro. After The Boy’s mansion falls into the void of the web behind Gambino on stage, the visualizer of The Boy’s mother would again appear, offering a final monologue.

Considering the title, it seems a reference to The Hitchhiker’s Guide to the Galaxy, where a Earth is a computer programmed to figure out the meaning of life and the universe, but is destroyed five minutes before it’s away from its calculation. This situation appears to reflect The Boy’s journey on BTI – he tries to find the answer to his existential crisis, falls into a cycle of trying again and again, and here, on “Earth: The Oldest Computer” meets his doom just as he was starting to feel a potentially sustainable connection with Naomi, just as he was beginning to understand his broader connection to the universe. It’s like some cruel joke, some sarcastic punchline. It’s as if Life itself trolled him.