Of all the tracks on BTI, Urn was Glover’s favorite, and as you can see above, others agree.

“Let you go, on, to the sea…let the modest go / as my mind goes to and fro, waking up for one more show.”

These lines might reference Glover’s role in Community and desire to leave it (“waking up for one more show”). His departure from Community was depicted as him leaving to sail a boat around the world (“go on, to the sea.”). Fittingly, the boat’s name is Childish Tycoon.

The universality of “Urn” is further reinforced by the music video for Sweatpants, where “Urn” is used as an epilogue (above). Glover croons while dancing under ethereal light, surrounded by a variety of dancers contorting under the boughs of a central tree; the dreamy sequence of shots and colors of an aurora evoke euphoria, an ecstasy of freedom in the act of release.

When The Boy hugs the urn in the screenplay, he whispers this central statement of BTI, a universal apology for our inherently lonely existence, carrying with it the hope that we can amend this tragic condition. The film clip shows that vulnerability and honesty pave the way for bonds.

On the Deep Web Tour, the performance of Urn was one of the more interesting uses of the Deep Web App. During the song, before an extended rendition of the track took off, there was a poll extended to the audience.

By using this moment of emotional vulnerability to reach out, Glover emphasizes this central technique of BTI. Furthermore, there is a connection between Gambino, The Boy, and the audience due to the prompt being “This is making me feel,” as if trying to gauge a shared understanding and connection with the work.

The multiple choice offering is also reminiscent of the same technique being used on childishgambino.com for “The Worst Guys,” when the hook was presented as a multiple-choice prompt.

This bond with The Worst Guys also opens up a more expansive thread that’s been woven through BTI – that of Glover’s apparent exploration of the sexual spectrum in light of the discovery of subjectivity, connection, and the perpetual dynamics of existence.

Remember that “The Worst Guys” saw Gambino employ hyper-repetition of the sexualized claim of the hook. The Worst Guys also saw hyper masculinity run rampant – from the aggressive sexual braggadocio to Chance/Marcus’ presence being emphasized (left), to the phallic overdrive at the end of the music video (right).

There were also many sexual lines throughout “The Worst Guys” that were not gender-specific, and it’s important to note that Glover himself was also talking publicly about gay rights at the time. In 2013, gay marriage had not yet been protected by the United States Supreme Court. Glover would go out of his way to praise Macklemore in particular for giving gay rights speeches during shows.

In Death by Numbers, we saw the removal of labels and an understanding of universal connection – that the state of the universe was change and interconnection, between all things. In Flight of the Navigator, Gambino has a dream of universal interconnectedness, and in it, the pervasive image is that “we all kissed, and became the same.”

“it’s a lie that you’re living. / I never understood the hate on a [n-word’s] preference / When every marriage is a same-sex marriage“

Now, in Urn, we receive a fitting epitaph for an idea of fixed, or even definable, sexuality. As we’ve seen Glover use vague pronouns to combine ideas of loss in terms of both The Boy’s mother and failed relationships with women, a similar effect occurs on “Urn” in terms of the loss of his father as well as potential homosocial/sexual relationships.

This isn’t to say Gambino was hiding a homosexual relationship, instead, it offers a representation of “maybe.” While on The Breakfast Club, Charlamagne asked Glover straight up: “Are you gay?” His response? “Nah. I mean, maybe.”

Glover also established these ideas back on Clapping for the Wrong Reasons, as he tells Fam a story about kissing a boy when he was younger.

For Glover in 2013, “Urn” seems to be the turning point in realizing this maybe – in leaving behind preconceived notions of needing some fixed, definable label to slap on his experience of sexuality. Over the years, he’s voiced this thinking in more ways.

For instance, take this scene from the second episode of Atlanta, where the discussion of whether or not one man is “gay” because he had relations with a trans woman. The guy presses Glover’s character, Earn, for an answer to the question. In this moment, as a reaction to outside pressure, it feels like one where Earn offers a voice for Glover’s thoughts.

How can you not be pansexual in space?

Glover also offered one potential label for this undefinable understanding of sexuality when on press tour for his role as Lando Calrissian in Solo: A Star Wars Story. When asked about Lando’s sexuality, Glover asked, “How can you not be pansexual in space?”

The thing is, we’re in space. Glover makes the Star Wars situation feel a little humorous, but the point he makes applies to the world we live in.

LINK: Glover on sexuality in GQ

This is the resolution, the notion that it seems we need to become more comfortable with: that there is no one, fixed, definable answer to what or who we are. While we grapple with the limits of understanding in our own era, if we think of the future, and true freedom, we will find ourselves free from limitation, free of the restrictions we’ve created for ourselves in trying to label and identify things in fixed manners. While there are reasons for these practices – we want to gauge others for our individual survival purposes, such as procreation – we’re evolving to the point where these labels and systems we’ve created are becoming obsolete, and if we want to move forward, we need to think about how to understand and express the freedom of our future, to think in a way that more equitably allows for that freedom.

The Boy meeting Naomi (played by Jhene Aiko) at a vegan restaurant in the script is almost certainly based on real life, as Glover told the story of meeting Jhené Aiko in many interviews.

Aiko wasn’t the only celebrity whose identity impacts our understanding of BTI, and Glover casts these celebrity collaborators as an injection of reality into his constructed world. The important takeaway here isn’t whether or not Glover and Aiko were dating – it’s that Glover and Aiko knew that their real world actions could affect the perspective of fans experiencing the art, blurring the lines between fact and fiction in a way that fuses the two, understanding the subjectivity of any ‘real’ or ‘true’ qualities.

Bed Peace, a verse of which Gambino penned for the day after meeting Aiko.

In interviews, Gambino noted the connection between drugs and love explored in Pink Toes.

“Pink Toes” is a slang term for a white woman, which in turn, could also be a term for cocaine. The term could also apply to a light-skinned woman, as it appeared in Glover’s show, Atlanta, when a strip club DJ shouts out the character Vanessa, played by Zazie Beetz, which can be heard above at -5:24.

The nod to C3PO is a reference to Star Wars Episode V: The Empire Strikes Back, when Chewbacca has to carry a broken C3PO on his back while evading Darth Vader.

“You never catch your boy po-pimpin’ / Me sittin’ on the sidewalk, now that don’t sound right.”

Gambino would pantomime his hands being cuffed behind his back while singing this line – foreshadowing the danger he’ll face later in the screenplay. 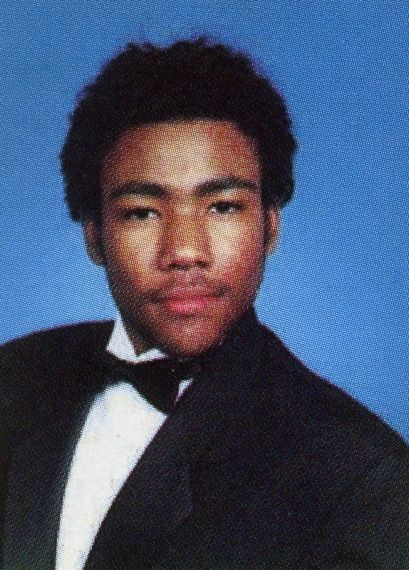 Prom night is a visceral memory, one that gets built up in culture, but it’s all a show and only lasts one night; despite this, it’s fun, and creates memories and The Boy is taking this approach with his connection with Naomi. In the face of his existential crisis, he’s enjoying the bliss of this while he can, even if it’s destined to end.

“He slangs, his hay, through the corridors / Every day, 20K, yep, at the very least for sure.”

In what appears to be a direct reference to the script, Aiko describes The Boy’s lucrative drug dealing (“hay” referring to weed). This scene’s clear ties to reality, emphasized by Glover and Aiko’s public partnership, indicates that The Boy’s drug dealing could also serve as a metaphor for Gambino’s musical career. The connection between art and drugs is something Glover has touched on over the years, across multiple media (above).

“I know you could pay / All the money you made, there’ll be plenty of sunshine.”

Money is the key to getting away, rising above some of the struggles they face. The Boy inherited wealth, but now needs to make it on his own to maintain his freedoms. As Gambino has illuminated throughout BTI, money is a power.

As Glover explains, we all have to eat. The thing is, we’ve contorted our eating habits, making it a competition that ends up exploiting other people. We can’t keep doing this – we’re not going to grow if it’s a dog-eat-dog world, we’re just going to keep killing each other and our planet.

The Boy obviates the responsibility of doing the numbers to someone else. These tedious but necessary accounting tasks are left to someone else, indicative of The Boy’s failures as a drug dealer. In the outro monlogue sample of Centipede (available here on SoundCloud) is the line “you know how boring bagging up is?”

“This is the part where they kinda fall in love a little bit.”